Two UPJŠ Faculties with Top Ranking in Slovakia by ARRA

The Academic Ranking Agency (ARRA) presented its seventh rating of Slovak university faculties based on publicly available and verifiable data about the quality of education and research at the individual faculties in 2010. 104 faculties of public universities and 5 faculties of private universities were included into the rating divided into 11 areas.

The “rocket” start of the UPJŠ Faculty of Arts and its acquired first place is the only considerable change in the philosophical group.  Thanks to the highest number of publications registered in international databases in 2010 and its success in acquiring grants, the Faculty of Arts gained a significant lead amongst all the faculties in the group.

For the first time, the UPJŠ Faculty of Science took the first place in the natural sciences group, where it got ahead of the last year’s winner thanks to the increase in grants (especially foreign ones) as well as the lowest number of students per professor and  associate professor, whereas those had the high share in the total number of lecturers.

The UPJŠ Faculty of Medicine was ranked the second in the ”MED“ group, advancing in the indicators of grant acquisition. The Faculty has also increased the number of quotations in international databases, as well as the number of registered applicants compared to the plan.

There were no significant change in the ranking of law faculties, where the UPJŠ Faculty of Law was placed third and achieved the best results regarding the number of students per lecturer as well as was the most successful one in grants.

The UPJŠ Faculty of Public Administration was ranked the ninth in the other social sciences group. 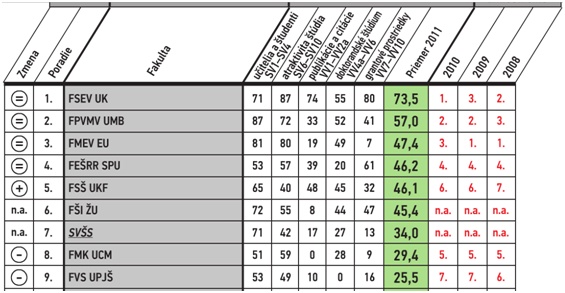