Another success of “low-temperature” physicists of Košice

Physicists of Košice from Institute of Experimental Physics SAS in Košice and Faculty of Sciences of Pavol Josef Šafárik University in Košice and Institute of Physical Sciences have achieved excellent result in the field of Low-temperature Physics in the long term. Their latest success is the approval of financing of the European Microkelvin Platform (EMP) project in amount 10 million EURO. European Microkelvin Platform (EMP) is an advanced European science-research infrastructure in the field of ultra-low temperature and ultra-sensitive measurement techniques with a specific focus on quantum technologies and quantum materials. The EMP project was submitted under the Call H2020-INFRAIA-2018 (project number 824109). One of the key partners of EMP project also is “Košice” Center of Low-Temperature Physics (CFNT), joint low-temperature workplace of Institute of  Experimental Physics SAS in Košice and Faculty of Science of P. J. Šafárik University in Košice.

European Microkelvin Platform is the consortium of 17 head academic industry institutions in Europe in the field of ultra-low temperature physics and technologies (http://emplatform.eu). The EMP Consortium represents a community of advanced science and technology partners that began to create during the Mikrokelvin project (project 7 ER EU) in 2009-2013. In the next years,  it gradually formed and transformed itself into the European Microkelvin Platform - with ambition to be the "European Laboratory of Ultra-Low Temperatures without Barriers”. The EMP project (and EMP consortium) is coordinated by Prof. Christian Enss from University of Heidelberg (Germany). For the Košice Center for Low-Temperature Physics is responsible RNDr. Peter Skyba, DrSc. from the Institute of Experimental Physics SAS in Košice. 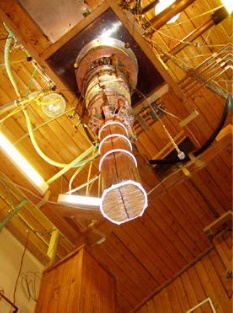 Participation of "Košice" Center of Low-Temperature Physics in the EMP Consortium and the EMP project definitely confirms its European scientific and technological level. Due to the fact that Europe has world domination in this field of science, the "Košice" Center of Low-Temperature Physics is also among the laboratories of world importance. This important position of the "Košice" Center is the result of the long-term and purposeful work of all its scientific and technical staff. This year is also the year of 50th anniversary of the first helium's liquefaction as well as anniversary of the establishment of  "Košice" low-temperature physics laboratory.