Lajos Thaisz - The founder of scientific botany in Košice. 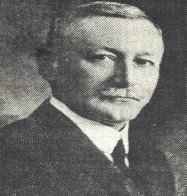 L. Thaisz was born in 1867 in Nagybánhegyes in former Csanád district (today Békés district situated in southeastern part of Hungary). He attended primary and secondary schools in Békéscsaba and Szarvas and he graduated from the University in Budapest.

In 1888 he was taken into the service at The Institute for Seed Control in Budapest as a probationer, assistant and adjunct in cooperation with Prof. K. Czakó. In 1907, he became the head of the Košice branch of the above Institute, which he reorganized. He founded a library, collection of seeds and plants there. In 1910, he was called to Agricultural Ministry in Budapest as a head of the group for meadow and grasslands management. In 1922 he retired at the rank of Ministery Adviser and in 1927 he was appointed the General Director for Research.

He was even-minded, quiet and modest man with immensely positive relation to Hungarian ground. He was a lord from top to toe even without country estate.

His scientific and professional activities can be divided into two groups: the field of floristic research, phytogeography and plant systematics and the field of agricultural botany.

At first I'd like to discuss the latter. At the Institute for Seed Control in Budapest, he concentrated his interests on seed growing and meadow and grassland management. In his numerous special and popular papers he dealt with rise and regeneration of grasslands and with various types of them, with meadows and pastures improvement, with grassing of waste places, banks, sands, with maintenance of garden grasslands. He supported cultures of clover-grass mixtures in which he allways pushed the application of native species. He proposed six mixtures with other combinations. He recommended these mixtures from the point of view of crop alternation, soil enrichment by nitrogen , and animal feeding. He was also interested in seed quality testing, seed falsification preventing, clearing of clover seeds from dodder seeds. He introduced a number of innovations in testing and sealing methods. Most of his lectures in State Hungarian Agricultural Association were published.

The most important publications in book form are works dealing with meadow and pasture improvement in Székelyföld region (1910), with grassing down of Hungarian soils (1927) and the plan of meadow and grassland management in Danubian region in Pest district (1930).

The second field which Thaisz paid considerable attention to was floristics, phytogeography, plant systematics, ecology and seed and fruit anatomy.

He studied the flora of former Hungary from 1885. He botanized not only in Hungary, but also on the territory of today's Slovakia, western part of Ukraine, Austria, Dalmatia, Romania (Transsylvania) and Switzerland. He thoroughly knew especially the vegetation of former Hungarian districts Abauj - Torna, Csanád, Csongrád and Bereg. He contributed significantly to the knowledge of Hungarian flora. He was the main contributor of Dr. Á. Degen in editing of exsiccates of Hungarian grasses, and exsiccate collection of genera of Juncaceae, Cyperaceae, Typhaceae and Sparganiaceae families prepared in Institute for Seed Control under Degen's supervision. He gave his large herbarium collection of 9.000 sheets to Hungarian National Museum (Budapest) in 1932. His herbarium specimens can be found also in Slovakia (Slovak National Museum in Bratislava, Agricultural University in Nitra, Botanical Garden of P.J. Šafárik University in Košice).

Lajos Thaisz was not only an excelent florist, but also a phytogeographer and ecologist. He was also interested in genesis of flora of regions studied. He wasn't satisfied with mere species account. He was attracted by causes of local flora differences and he wanted to know, why certain species grow in certain conditions and not in the others. That's why, along with the study of Zádiel and Háj valleys (which fascinated him as well as other botanists), he decided to study also the plateau between them. "Flora occurring on the plateau above the valley is in general the same as the flora on lower calcareous mountains of Upper Hungary. Only from time to time a taxon from high mountains (e.g. Senecio aurantiacus) can be found here, but high mountain species, in which both valleys are very rich, are absent here. The explanation of this phenomenon can be found not only in different genesis of these localities, but particularly in the fact that the climate of plateau is less severe than that of valleys. In these narrow valleys, surrounded by high rocky walls, the snow thaws very late in spring and later on, very cold brooks flowing down the valley continually retain relatively low temperature of valleys. Also the fact that high rocky walls limit the entrance of sun rays contributes considerably to cold climate of the valleys. In some places the plants receive the direct sunshine only 1/2 or 1/4 of day and in other places none. The result of these conditions resembling alpine climate is alpine vegetation. As on the highland above the valleys high mountain flora is absent, or occurs very sporadically, thus in Háj and especially Zádiel valleys vegetation inversion has developed. I must point out this phenomenon as the most interesting result of my studies of this place." (Bot. Közl. 9 : 224, 1910).

L. Thaisz does not concentrate only on rare species, but he considers it important to publish more common species, too: "I consider it useful to emphasize these plants because in our district, where more floristic regions are meeting, they present real phytogeographical border stones." (op. c. : 226).

Thaisz's intention to continue in studies of Abauj-Torna district flora with the aim to propose a floristic division of the district flora couldn't be finished because he was called to Agricultural Ministry to Budapest in 1910.

L. Thaisz was hard-working collector who prepared and preserved his specimens very thoroughly. He often gave his herbarium material for revision to specialists and botanical friends. On the basis of his collections of rowans from Slovak Karst (Jelení vrch, near Hačava village) R. Soó described Sorbus aria subsp. cretica f. thaiszii in 1937. Z. Kárpáti transfered it to species value as S. thaiszii (Soó) Kárp. in 1944. He evaluates it as a transition form between S. danubialis (Jáv.) Kárp. and S. aria (L.) Crantz f. cyclophylla (Beck) Jáv. It is probably a relict of flora migration when introgressive hybridization between these species occurred. The species is distributed in Aggtelek Karst, Bükk Mts., Mátra Mts., Pilis Mts., Bakony Mts. (all in Hungary); Slovak Karst, Low Tatra Mts. (Mt. Magura), Middle Hornád valley (Hradová hill, Trebejov village) (all in Slovakia); Lower Austria (Hainburg hills) (KÁRPÁTI 1960) and Slovak Paradise (KOVANDA 1986). Taxonomic evaluation of this taxon still waits for its detailed embryological, karyological and chemotaxonomic elaboration, which together with biometrical evaluation, more detailed data on distribution and homogenity of populations can contribute to clearing of its taxonomic value.

After Thaisz Mentha excedentiformis Trautmann subsp. Thaiszii Trautmann in Kiss 1939 is named, too. It is a nomen nudum and the taxon belongs to M. longifolia L. group (Soó 1968: 133). According to Štěpánek ( ex HOLUB 1988) the concept of microspecies in Mentha genus is not suitable, as these are vegetatively reproducing clones of single nothomorfs without larger taxonomic importance (cf. HOLUB 1988: 77).

Májovský described a new species of fescue (Festuca javorkae) from southern Slovakia in 1963. He considers it as a product of introgressive hybridization of F. vaginata Waldst. et Kit. ex Willd. and F. rupicola Heuff. (MÁJOVSKÝ 1963: 327). The above mentioned F. wagneri is included in his newly described species as var. wagneri. That's why it is the case of nomen illegitimum and Holub names the Májovský type variety of his species F. majovskii Holub (F. javorkae s. s., excl. var. wagneri). This species occurs in southern Slovakia (Čenkov, MÁJOVSKÝ 1963) and records of F. wagneri agg. from Hungary and Lower Austria probably belong to this species, too (SOÓ 1973: 288, SOÓ 1980: 504).

Only further biometrical investigations from the whole Pannonian region can make taxonomic and evolutionary questions of F. wagneri agg. clear. Nowadays, it is fully justifiable to divide them into two above mentioned species.

In conclusion it can be said that L. Thaisz contributed fundamentally to the widening of botanical knowledge in many fields of science. He was an excellent botanist and a splendid man. In this way the name of our new first international, exclusively botanical journal in Slovakia will permanently remind of his botanical work, which laid the foundations of the flora knowledge of our region.