SAFTRA IMAGINE, s.r.o. has become the first commercially successful start-up company of the Pavol Jozef Šafárik University in Košice, and it has achieved success in a closely watched international environment. Using its experience in the field of providing third level medical treatment as well as competences in the field of optimisation of complex systems SAFTRA IMAGINE as a subsidiary of the SAFTRA s.r.o. completed a comprehensive plan for one of the largest public pharmacies in Slovakia.  Based on the contract SAFTRA IMAGINE prepared a functional design for a pharmacy, a process and assortment optimisation, supervised the project documentation, trained the staff, and it also covered the legal procedures.

The new AGEL pharmacy belongs to the largest private provider of medical treatment in Central Europe and is located in the entrance area of US Steel. It is operated by the 1st private hospital Košice-Šaca, a member of the AGEL group. The ceremonial opening of the most modern public pharmacy in Slovakia took place on March 16, 2017, and it was opened by the management of the international giant AGEL, by the management of the 1st private hospital, and by the representatives of the SAFTRA IMAGINE, s.r.o. company.

SAFTRA IMAGINE, s.r.o. was established as a subsidiary of the SAFTRA, s.r.o. university company, and it is authorised to transfer the knowledge and technology of the Pavol Jozef Šafárik University in Košice into practice. SAFTRA IMAGINE utilizes the professional experience of its establishers in the development and commercialisation of materials and medical theranostic procedures (a patent of the university), and in the process of providing consultation and counselling in case of complex problems in the field of the medicine and transport. SAFTRA IMAGINE, s.r.o. was established in September 2016 by doc. Uličný and by his student Patrik Jakabčin. 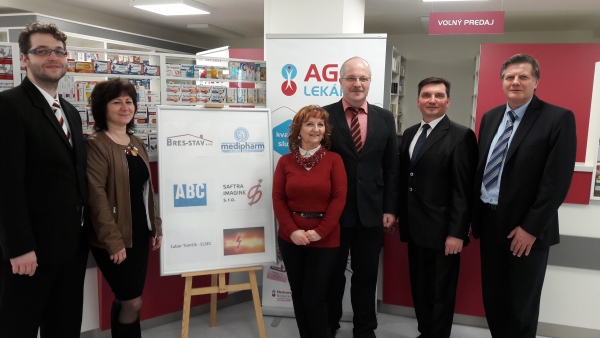